I just got back from a week-long family trip to Tenerife. Apart from the necessity of 6-hour flights to and from our chosen destination (seriously, when oh when will the brilliance of science give us teleporting?) it was a blissful and uplifting oasis of sunshine in the middle of a dark northern winter.


Maybe it was the sudden burst of wonderful, warming sun, maybe it was the holiday atmosphere, or very possibly it was the effect of one or ten too many sangrias, but I felt an internal shift during our week in Tenerife.

As a result, I recaptured some of the I Am Fantastic And Invincible inner power I thought I’d lost irretrievably somewhere in my childless and self-focused 20s.


For the past 6 years, holidays have been about looking after my children – fretting gently but constantly about their food, sleeping arrangements, safety, jet-lag, sunburn, bodily functions, and all those countless other things that are thrown into mild disarray when we are away from home (and don’t get me started on those years of family holidays when, on top of everything else, I was tethered tightly to my Blackberry and rarely able to escape the work-related knot in my stomach; those years when getting the kids to sleep in strange beds took on added importance, because of the feverish hours on my laptop that loomed into the night ahead of me…)


During this trip, however, I realised that family travel had suddenly become a whole lot easier. The kids’ performance on planes and in unfamiliar places has improved over time, and Little Sister has finally reached that first milestone of basic independence and resilience that seems to come around the age of 3. There were times last week when I was actually able to lie on a sun-lounger and watch my two children happily together, not to mention this memorable moment of contented colouring in Helsinki airport baggage claim: 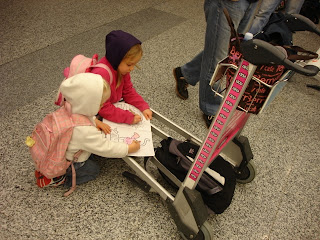 This was the first trip where my husband felt confident he could watch both the girls without major trauma of some kind being suffered by anyone concerned. And (happily or sadly, depending on your viewpoint) following my recent resignation from Biglaw, this was also our first overseas holiday as a family where I was truly free to be on holiday 24/7.


The combined force of all these realisations was sizeable. Suddenly, I saw the reality that this could actually be MY holiday, too, and I could spend some part of it doing something that was MY treat, something that didn’t have to be forfeited or watered down because of the kids, something I wouldn’t have even thought of doing since those All About Me days of my 20s.


I knew what my big treat would be the minute I saw it (at Siam Park waterpark).


The Tower of Power.


A fantastically, terrifyingly tall beast of a waterslide.
28 metres high, with an almost vertical drop.
A four second rush of terror.

I rushed at the stairs and climbed them at high speed (a reckless action resulting in humiliatingly wheezy breathing as I waited in line at the top, a red-faced Bridget Jones-esque figure surrounded by shredded and ripped Young Whippersnappers. But I digress.)


I waved to the far-away specks of my spectating husband and kids as I climbed into the flume. I lay down carefully and assumed the cross-everything position. The lifeguard gave me a push-off and I fell, plunged, flew, the dazzling sky above and the roaring rush of water all around. It was terrifying and exhilarating and amazing. I thought about screaming but was rendered speechless by velocity and adrenalin. I shot like a bullet into the pool below, and burst up to the surface triumphant, pumping the air with both fists. I haven’t felt so truly alive in years. It was a rush that kept me on a high for the rest of the day, if not the whole week.


Just writing about it makes me long to do it again. And again.


It was a huge experience which taught me something big. Strictly speaking, I didn’t need the Tower of Power Experience. And yet, it gave me something that, honest-to-God, helped me be a better parent and wife, a better person, for hours and days afterwards. What was it exactly? A moment of challenging my own limits in the best possible way; a moment of pure freedom and head-space; an energizing rush of kickarse proportions. A moment when I recaptured and embraced my own power as me, an individual.


This went above and beyond self-preservation; it was much more than an Oxygen Mask Moment. This was self-enhancement – suddenly realising, in an instant, the possibility of being a stronger and better and happier me.


I have made my New Year's resolution for 2012: this year will be the year I seek out and grab Tower of Power Moments, left, right and centre.


I will keep my arms open to the heady rush of life, and I will open my eyes to the colours of everyday life, in all their brightness. I will push boundaries I’ve drawn unnecessarily for myself, and explore what lies beyond.