The white noise of parenting


Usually I write in a quest for clarity and headspace. Lately, however, family life, with all its ups and downs, has been coming at me thick and fast, with no time to process things fully. Getting my thoughts corralled has seemed overwhelming.


The kids’ summer holidays, which ended earlier this month, were wonderful and exhausting; highly fulfilling and overly frustrating. Some days I felt as though being a parent and having whole days and nights with my children was the greatest gift in the world. Some days I felt more as though being a parent was like having a white noise machine pointed directly at my ear all day, every day: the noise wasn’t always unpleasant, and yet sometimes I just longed for silence.
Small children have so many needs and questions, and so much within themselves that they’re struggling to sort out. Fulfilling their needs takes time, energy, patience, and often more skill than you thought you had, and when the going gets tough you can’t just throw in the towel and walk out. Once you are a parent, there is no going back. You wouldn’t even want to go back because you’ve never loved someone like this, and yet some days you just don’t want to keep going forwards either.


A particularly low moment came one Friday evening. We had just arrived home from a five-day family road trip. It had been a satisfying and memorable trip - lots of fun highlights, quality time with good friends, delicious Finnish summer food, and smiles and laughter. However, the drive back had been long and tiring, and after an hour of hefting stuff from the car, unpacking, and finding something to eat for dinner, all the while dealing with a steady stream of interruptions, questions and pleas for attention from the kids, My Finn and I were short on energy and patience.


Finally, I sat down for a few quiet moments at the computer. Almost immediately, my younger daughter appeared at my knee. “Mummy, look! There’s a man!”


I wrenched my attention from a Facebook message, sighing with slight annoyance at the interruption, and followed Little Sister's gaze through our fifth storey window. I dutifully acknowledged the man she’d spotted (sitting out on his balcony). I turned back to my laptop.


Moments later I was startled by deafening yelling from my husband. On the other side of the living room, Little Sister had pulled the coffee table over to the open window and had climbed up to get a better look at her man. Hubby had happened to walk into the room at that point, and the walls literally shook with the force of his shouting at her to get down immediately. Little Sister started crying frantically, surprised and devastated at this sudden explosion. A bitter exchange followed. I angrily accused hubby of excessive anger that was clearly targeted at me (on my laptop AGAIN, not paying enough attention to my children) and that he could have dealt with the situation very differently. He maintained that extreme measures were justified when a child was climbing up to reach a fifth storey window and it was a matter of “life and death”. But yes, he was angry at me too, because I had chosen the wrong time to occupy myself with Facebook. Little Sister had been doing something that was (admittedly) very dangerous within a few metres of me, and I hadn’t been aware of it because I was in my own little social media world.


[In my defence, the double-glass window in question does not open more than about 10cm and Little Sister absolutely could not have fitted through that space. But still.]


I felt overwhelmed at the truth in what he was saying, and overwhelmed at the reality that parenting requires vigilance and selflessness always, tiredness/bad moods/feelings of wanting a break right now notwithstanding, and I still felt shell-shocked at all the shouting, and in that moment I really wanted to give up and walk out of my own life. But instead I burst into tears and fled to the kitchen for a tissue.


LS: [tearfully] I hate you, Mummy!
Me: Why do you hate me?
LS: I don't want you to be my friend any more.
Me: [Exerting myself to stay calm] Why is that?
LS: Because you're too naughty.
Me: [Takes deep breaths] What could I do to be less naughty?
LS: [Thinks for a moment] I just want you to be happy.


I thought about that conversation for days and weeks afterwards. It is so vitally important for children to see happiness in their parents, and so important for parents to do the things that will help them both appear and genuinely BE happy – making time for themselves and their spouse, getting enough sleep, and generally making sure their own air mask is fitted before attempting to help others. I got caught out by my unnervingly perceptive three year old, and I want to do better in future. I’m working on it.


This summer wasn’t all white noise and fights and meltdowns, though. Honest to God, we had so many wonderful moments, too - playing in sunny parks and on the beach, swimming (when it was warm enough), visiting friends’ homes and summer cottages, chilling out with close family, seeking thrills at fun-parks (we even made it to Särkäniemi’s Angry Birds Land!) and hanging out with our lovely neighbours in our building’s shared courtyard. 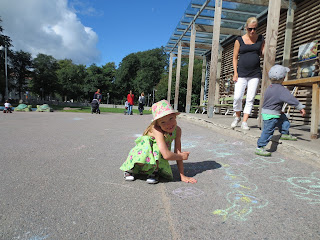 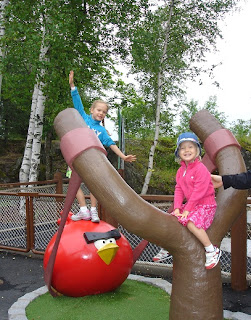 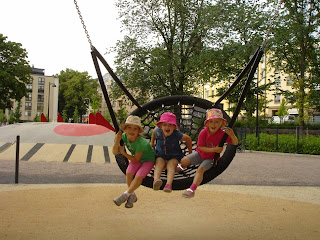 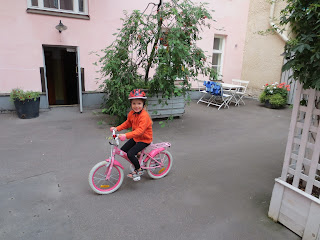 Big Sister learned to ride a bicycle without trainer wheels and (mercifully unconnected with bicycling) lost her front tooth just in time to look like a *real* first grader. 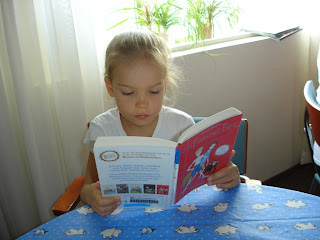 She went from being a solid beginner reader to an avid consumer of books. 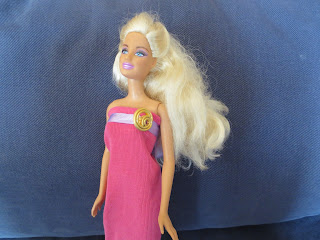 Lately, she has developed a passion for fashion designing, and with help, has even managed to make a few pieces for her Barbie. 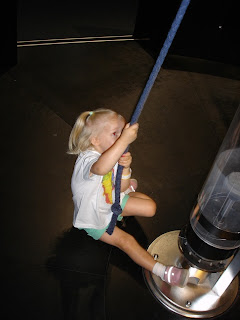 This summer, Little Sister learned to catch a ball and shoot baskets into a pint-sized basketball hoop. At the science centre, she managed to haul a bowling ball into the air!

She passionately seeks speed and danger – on bikes, on things that whiz around and around, and on climbing frames or anything else that is high off the ground… 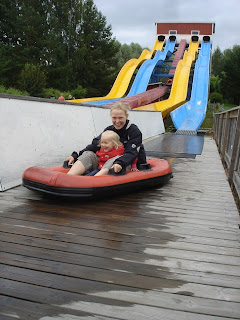 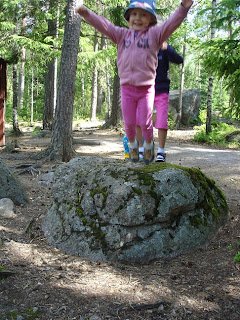 At a shopping centre last weekend we were playing in a kids’ activity corner next to an escalator. Suddenly Little Sister got it into her head to grab the moving handrail (from the outer side of the escalator) and next thing I knew she was being swept up into the air. Giggling loudly, she saw absolutely no danger in this situation, and didn’t for a moment consider letting go at a safe height. Thankfully I was quick enough to grab her while she was still within my reach - before the handrail continued on its two-storey climb upwards. My heart stopped momentarily at some point.
Kids do that to you. They fill your heart to overflowing, and wring it out, and stop it completely for terrible split-seconds, all in a single 24-hour day.
This summer, I had fifty of those days, all in a row.
It has been quite a ride.
Posted by Katriina at 2:16 PM